Anchorage Testing for Fall Protection Devices – Are You Doing Harm?

Before any rope descent system is used, the building owner must inform the employer, in writing that the building owner has identified, tested, certified, and maintained each anchorage so it is capable of supporting at least 5,000 lb (268 kg), in any direction, for each employee attached.

There has been much talk on how to verify a window washing anchor can support a 5,000 pound load. Some have contended that the anchor requires pull testing to 5,000 pounds, while others have argued that by the time the 5,000 pound pull test is complete, the anchor may sustain permanent damage that renders it unfit for use. 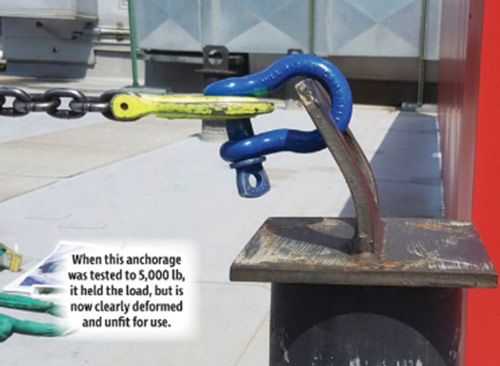 If you read [1910.27(b)(1)(i)] closely, you’ll note that OSHA doesn’t specifically specify pull testing as the means of proving a window washing anchor is capable of supporting at least a 5,000 pound load in any direction. Window washing anchors DO need to be pull tested as part of the certification process, but your fall protection company should also consider the materials and manufacturing processes, and workmanship, anchor point geometry, and how the anchor connects to existing structure.

The calculations made to model or validate the strength of a given anchor point (think activities other than actual pull testing the anchor) are sometimes referred to as “proof testing.” If an anchor “fails” during proof testing phase, it doesn’t make sense to go to the time and expense to perform a pull test. What’s more, during a pull test/strength test, care must be exercised to spot signs of “inelastic structural behavior, often indicated by permanent deformations when the load is released.”

Now comes the tricky part. It is possible for an anchor to exhibit signs of permanent deformation during pull testing, but said damage does not mean that the anchor didn’t meet the strength requirements outlined in [1910.27(b)(1)(i)]. That said, an anchor with permanent deformation DOES require replacement. Bottom line, the company performing the testing needs to use a combination of proof and strength testing, and pull testing must be performed with great care in order to avoid permanent damage to the anchor.

To take a deeper dive on this topic we suggest an article by Rupert Noton and Andrew T. Emmons that appeared in the October issue of the Journal of the American Society of Safety Professionals. 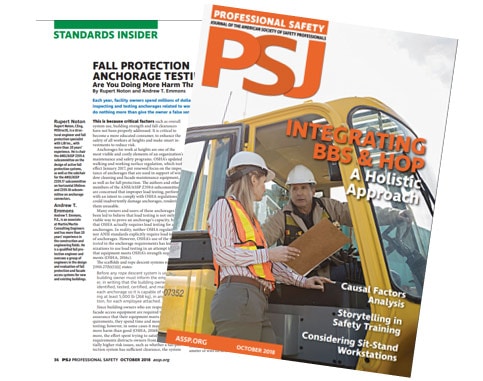 Bottom line, the rope decent anchors in your facility need to be inspected, tested, and certified to comply with new OSHA window washing anchor regulations, but before you pick a company to inspect your anchors, remember to ask them about the specifics of their testing protocol. If a potential vendor mentions nothing more than pull testing to 5,000 pounds, chances are good that you should select another company to certify your anchor points.

If you have questions the content of this post, or you need a quote to have your window washing anchors inspected and certified, contact the safety experts at Diversified Fall Protection for further assistance.

We're happy to have you here. When you work with DFP, you can expect the same level of high-quality systems, solutions and service you've come to expect from Peak Fall Protection. On our website, you will find industry-leading fall protection systems and educational resources to help support you workplace safety. We look forward to partnering together on your next project.

We're happy to have you here. When you work with DFP, you can expect the same level of high-quality systems, solutions and service you've come to expect from Fall Protection Systems. On our website, you will find industry-leading fall protection systems and educational resources to help support you workplace safety. We look forward to partnering together on your next project.

Legacy Fall Protection Systems clients wishing to access the webstore for making online purchases may do so by clicking here.